Some people think that the performance of Hajj and Umrah is very complicated. Therefore, they don't make enough effort to learn to perform the essential rites correctly and have to pay Dam (sacrifice of an animal) as a penalty.

Then some people are put off by the lengthy Dua'as in Arabic listed in the most books. To put these people at ease from the very beginning, we start with the suggestion to use the simple Dua'as that they already know. Then the procedure of Hajj and Umrah is presented in a simplified way. 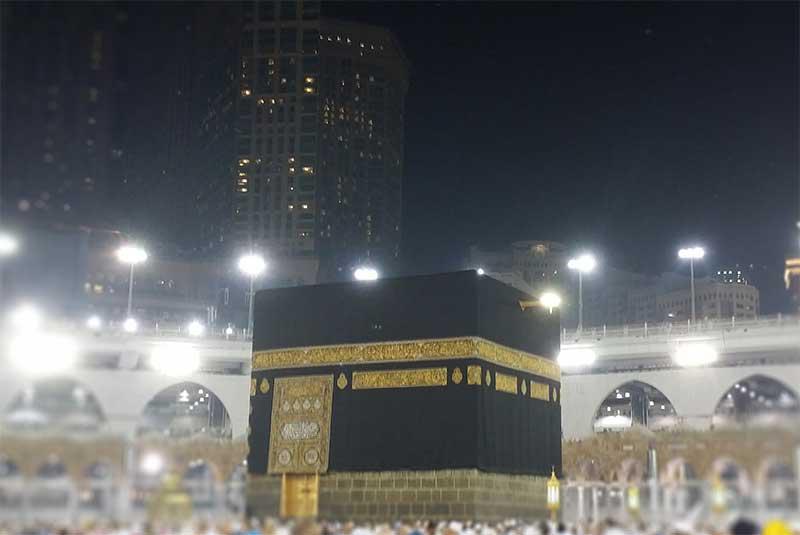 The literal meaning of Ihram is to make haraam (forbidden). When a haji pronounces the Niyyah (intention) of Hajj and Umrah and utters Talbiyah, certain halaal (permissible) things become haraam for him. This combined action (Niyyah and Talbiyah) is called Ihram. The two sheets that a haji wears are figuratively known as Ihram but the real Ihram is Niyyah & Talbiyah. If someone wears these two sheets and does not declare his intention and utter Talbiyah, he does not become a Muhrim. That is why, before Niyyah and Talbiyah, he can cover his head during two rakahs of Nafl, an act which is not allowed in the real state of Ihram.

How To Perform Umrah

The Rites Of Umrah: The only rites of Umrah are:

Tawaf means circling around something . Here it means moving around Ka’bah seven times with extreme love and devotion.

The literal meaning of Sa’ey is to run or to make effort, but as a Hajj and Umrah term, Sa’ey denotes walking back and forth seven times between the hills of Safa and Marwah which are situated to the south and north of the Ka’bah respectively. Now there are only signs of these hills and the whole route between them is enclosed in a long gallery. Sa’ey has a historical background. Prophet Abraham left his wife Hazrat Hajra and infant son Hazrat Ismael in the wilderness of Makkah at the command of Allah.

The mother and son lived for five days on the food and water they had when the water was completely finished. The mother ran frantically seven times between the hills of Safa and Marwah in search of water for her son. Suddenly the fountain of Zamzam oozed miraculously near the feet of Hazrat Ismael. Sa’ey is included in the rites of Hajj and Umrah to commemorate this event of search and struggle.

You may perform Umrah as often as you want according to the above procedure. And if you want to perform just a nafl Tawaf, follow the same procedure, however, in a nafl Tawaf there is no Ihram, no Ramal, no Iztaba and even no Sa’ey.

Search for flights to Jaddah